Fireworks and the 4th of July

The United States of America is celebrating its Independence this week with family get togethers, food, and Fireworks.  While most historians believe that pyrotechnics began in China more than 2,000 years ago with roasted bamboo, fireworks have evolved into a modern-day spectacle.

Originally discovered by Chinese alchemists who were searching for immortality, fireworks are believed to originally include potassium nitrate, charcoal, sulfur, and a few other ingredients.  When placed into a bamboo shoot, these ingredients would produce a loud blast and orange bursts of color.[1] For the next 1200 years, fireworks had many uses including scaring away evil spirits, celebratory blasts and explosions during military engagements. The methods to create the first “guided” rocket also helped fireworks masters to create aerial displays. Trade routes from China to the Middle East and Europe carried the technology West where innovators continued to improve and build more powerful fireworks.

By the end of the Renaissance, working with fireworks became a skill to master. “Firemasters” had assistants called, “green men,” a name developed for the leaves these assistants wore to protect them from the sparks. The green men were the hosts of the aerial displays that provided entertainment for a wide variety of events, including military victories, religious events and royal celebrations.[2] Italy became a center for fireworks training as it had become an artform, however European rulers strove to create the best “illuminations” they possibly could to celebrate their life events, some even offering the reward of knighthood to “firemasters.”

Fireworks eventually spread to the Colonies in the 1600s and in 1777, the United States of America marked the first anniversary of its independence with a large firework display. This is often credited to John Adam, who in a letter to his wife on July 2, 1776, penned,

“The day will be most memorable in the history of America…I am apt to believe that it will be celebrated by succeeding generations as the great anniversary festival. It ought to be solemnized with pomp and parade…bonfires and illuminations…from one end of this continent to the other, from this time forward forevermore.”

It wasn’t until the 19th century that firemasters developed fireworks as we know them today; with vibrant colors and a variety of formations. The pyrotechnic schools that had been developed during the Renaissance began pushing for more elaborate displays. Italian firemasters produced fireworks with new colors by introducing metal salts into the mix such as strontium to give a red hue, barium for green, copper for blue and sodium creates a bright yellow flash.[3]

The fireworks industry now has a wide variety of displays, some of which are patented, like the Mickey Mouse shape that Disney produces during their fireworks display (US 5,627,338)[4]. Patented in 1997 and invented by Kyle W. Poor, B. Thomas Craven, and Bernard M. Durgin, the display launches a series of projectiles into the air with an “extremely accurate fuse,” allowing detonation to occur at a precise altitude, creating the shape of Mickey Mouse’s head. 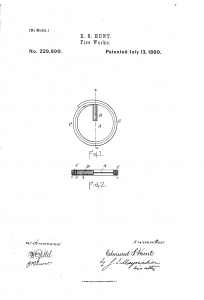 One of the earliest types of fireworks to be patented in the US is the firework known as the “sun wheel.” Patented on July 13, 1880 (US 229,890), the sun wheel was invented by Edmund S. Hunt.[5] This class of firework produces a small explosion that propels the disc containing the fireworks into a spin creating pinwheel.

Sun Wheels are still used today by amateurs as well as professionals.