From Protest to Parade: A Quick Look at Labor Day in the U.S.A.

Labor Day in the United States is this weekend; September 2nd. In the U.S., 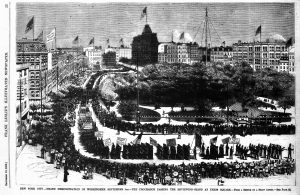 Labor Day is a federally observed holiday honoring the U.S. workforce. Many people celebrate the event with picnics, barbecues, pool parties and maybe even a parade or two, like the one that took place on September 5, 1882 in New York City (pictured right).  The origin of Labor Day finds it roots during the 1880’s when, “the average American worked 12-hour days and seven-day weeks…” just to earn a basic living.1

In the midst of the Second Industrial Revolution, people of all ages, from the young to the old, worked in less than stellar working conditions.  This time period was often marked by unsafe conditions and unsanitary facilities. These working conditions facilitated the creation of Labor Day as well as labor unions which sought to end these poor conditions through protests and strikes.

Many, but not all, of these protests became violent. For instance, the parade pictured above was not actually a celebration at all, but rather 10,000 workers banding together, taking unpaid leave from work. Their goal was to march from City Hall to Union Square in New York City in protest for safer working conditions and better pay. This march became a large, annual celebration and continues to this day. 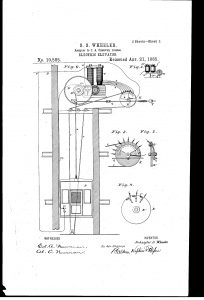 A major contribution to the Second Industrial Revolution in the U.S. and the urbanization of the manufacturing centers of the U.S. was the rise of the skyscraper. However, the skyscraper is highly impractical without the advent of one thing: the elevator. The elevator in its earliest form has been around for more than 2,000 years and many of the complex parts of the elevator have contributors from all over the globe, but the electric elevator, that was invented in New York City by Schuyler Wheeler (U.S.R.E. 10,585E). Originally issued on February 27, 1883, the patent was reissued on April 25, 1885. Wheeler’s invention utilized electricity to run a motorized elevator up and down the elevator shaft instead of steam in conjunction with a belt and counterweight.

Innovation like this provided opportunities for the United States working classes as they built some of our most memorable skylines. It is important that they, along with everyone that works hard every day, are recognized for their labors.