USPTO releases report about role of women in the patent system

On October 31, 2019, the United States Patent and Trademark Office (“USPTO”) released the SUCCESS report, focusing on the participation of women, minorities, and veterans in the U.S. patent system. The report shows that the contribution of these groups may be underrepresented in certain instances.

For example, the USPTO findings state that women are underrepresented as inventors on U.S. granted patents. In 2016, women were named as inventors on 12% of granted U.S. patents. This low number is surprising, especially since women have contributed greatly to the advancement of science and technology through the years.

Ellen Ochoa is a veteran of three NASA Space Shuttle flight missions and was also a co-inventor on three patents: an optical inspection system, an optical object recognition method, and a method for noise removal in images.

The research of Frances Arnold, as a pioneer in the field of directed evolution, has led the scientific community to create new drugs that are used in many labs across the world. She is an inventor on 60 U.S. patents.

Dr. Shirley Ann Jackson is an American theoretical physicist and one of the researchers most closely associated with the technology of the caller ID and call waiting.

There are numerous patents listing women inventors that have made important contributions to the world.  For example:

a copy of her 1903 patent for windshield wipers 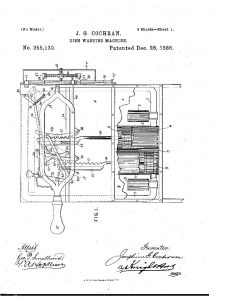 There are many examples of great contributions by women inventors to the U.S. patent system, but based on these USPTO’s findings, continuing progress is needed to bridge the statistical gender gap between women and men inventors in U.S. patent and application filings.

One sign of this continuing progress is the 14% increase in the number of women inventors contributing to U.S. patents between 1980 and 2016 (Resource: USPTO.gov); the future looks promising and the trend appears to be heading in the right direction.